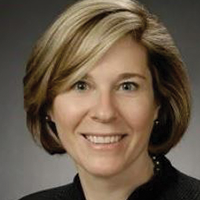 Shipley has more than 25 years of banking experience in local, national and international markets. A native Pittsburgher, Shipley joined Huntington 2012 from The Royal Bank of Scotland/Citizens Bank, where she was head of global trade finance for North America.

Shipley has also been named one of the “Best 50 Women in Business” in Pennsylvania, Distinguished Alumna by the University of Pittsburgh Katz Graduate School of Business and an Athena International finalist. She was honored as a Pittsburgh Business Times Woman in Business award winner and an Oakland Catholic Leading Lady as well as a Woman of Distinction in Business by the Girls Scouts of Western Pennsylvania.