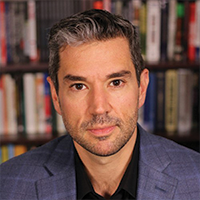 Director, National Consortium for the Study of Terrorism and Responses to Terrorism (START), Professor of the Practice, University of Maryland

William Braniff is the Director of the National Consortium for the Study of Terrorism and Responses to Terrorism (START) and a Professor of the Practice at the University of Maryland. He previously served as the director of practitioner education at West Point’s Combating Terrorism Center (CTC) and an instructor in the Department of Social Sciences. Braniff is a graduate of the United States Military Academy. Following his Company Command in the U.S. Army, Braniff attended the Johns Hopkins University School of Advanced International Studies (SAIS) where he received a master’s degree in international relations. Braniff then served as a foreign affairs specialist for the National Nuclear Security Agency. He lectures frequently for counterterrorism audiences including the Federal Bureau of Investigation, Joint Special Operations University, National Defense University, the Foreign Service Institute, the Defense Intelligence Agency, the Diplomatic Security Service Antiterrorism Assistance Program, the United States Attorneys’ Office and for DHS Homeland Security Investigators. Braniff has also taken a keen interest in the field of countering violent extremism (CVE), and his input has been sought out by the Department of Justice, the Department of State, the FBI and the National Security Staff, and the National Counterterrorism Center.  He spoke at the White House Summit on Countering Violent Extremism in February 2015. Braniff has testified before Congress on four occasions, and appears regularly in national and international news media. His research focuses on domestic and international terrorism, counterterrorism and countering violent extremism (CVE). He is a member of the Editorial Board of the International Centre for Counter-Terrorism-The Hague (ICCT), the RESOLVE Network Research Advisory Board, the Prosecution Project Advisory Board, and the Global Internet Forum to Counter Terrorism (GIFCT) Independent Advisory Committee (IAC). Braniff is a founding board member of We the Veterans, a nonpartisan, nonprofit organization harnessing the strength of veterans and military families to support the pillars of American democracy.