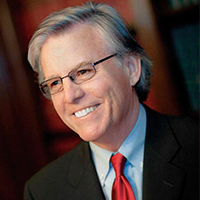 Terrence M. Connors is a graduate of Canisius College where he was elected to Who’s Who in American Colleges and Universities and named Captain of the Varsity Basketball Team.  A member of the Canisius College DiGamma Honor Society, he was Guest of Honor at the 1995 DiGamma Reception.  He served two terms as a member of the Board of Regents of the College and in 2004 was recognized as a Distinguished Alumnus.

He is also a graduate of the University at Buffalo School of Law and in 1994 he received the Distinguished Alumnus Award for the Private Practice of Law.  He is a former member of the Dean’s Advisory Council and was selected by the Law School to Chair the Campaign for UB: Generation to Generation, the National Campaign to increase the endowment of the Law School.  The jury selection room in the Law School Courtroom has been named the Terrence M. Connors Jury Selection Room.  In 2013, the Buffalo Law Review recognized Terry for his outstanding achievements in the legal profession and his devotion to SUNY Buffalo Law School.  In 2016, Terry received the Edwin F. Jaeckle Award, which is the highest honor the School of Law and its Law Alumni can bestow.  Award winners exemplify the highest ideals of the Law School and have been recognized for their significant contributions to the school and the legal profession.  Recently, Terry was named Chair of the National Board of Advisors for the Law School’s Advocacy Institute.

Mr. Connors began his legal career as a Litigation Associate with the law firm of Damon & Morey, becoming a general partner, a member of the Executive Committee, and ultimately Chairman of the 55-lawyer firm.  In 1986, he and Lawrence J. Vilardo, Esq., formed Connors & Vilardo, LLP, a litigation boutique.  In 2015, President Obama appointed Mr. Vilardo a District Judge for the Western District of New York.  The firm continued as Connors LLP.  Currently, there are seventeen attorneys and ten paralegals at the firm.

His practice is limited to trial and appellate practice in civil and criminal litigation, and he has participated in several celebrated civil and criminal trials.  He is a frequent lecturer and author on trial practice.  In addition, he has been an instructor in Trial Technique for the State University of New York at Buffalo, School of Law and the New York State Bar Association Trial Academy at Cornell Law School.