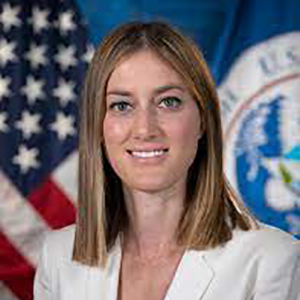 Samantha Vinograd is the Acting Assistant Secretary for Counterterrorism and Threat Prevention and Law Enforcement Policy at the U.S. Department of Homeland Security. She was previously a CNN National Security Analyst, a Senior Advisor at the Biden Institute, and a Visiting Fellow at the University of Chicago Institute of Politics. She began her career under President George W. Bush as the Deputy U.S. Treasury Attaché to Iraq, and she subsequently served on President Barack Obama’s National Security Council as Director for Iraq, Director for International Economics, and Senior Advisor to the National Security Advisor. She later joined Goldman Sachs, where her work focused on building public-private sector partnerships across a broad range of policy and business issues, and she later led global public policy at Stripe.

Ms. Vinograd has been deeply engaged in social impact work and served as an advisor to the U.S. Fund for UNICEF, Save the Children, and to the Concordia Summit. She was a Visiting Fellow at the University of Pennsylvania’s Wharton Public Policy Institute, a David E. Rockefeller Fellow at the Trilateral Commission, and a Millennium Fellow at the Atlantic Council. She was also on the board of the Women’s Foreign Policy Group.

She is fluent in French and studied advanced Arabic and Hebrew. She received her BA in Asian and Middle Eastern studies from the University of Pennsylvania and her MA in security studies from Georgetown University.