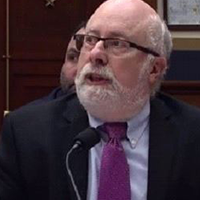 Director, Bard Center for the Study of Hate

Kenneth S. Stern is the director of the Bard Center for the Study of Hate.
Mr. Stern is an award-winning author and attorney, and was most recently executive director of the Justus & Karin Rosenberg Foundation. Before that he was director of the division on antisemitism and extremism at the American Jewish Committee, where he worked for 25 years.

Mr. Stern’s op-eds and book reviews have appeared in the New York Times, the Washington Post, USA Today, the Forward, the Jewish Telegraphic Agency, and elsewhere. Mr. Stern has appeared on the CBS Evening News, Dateline, Good Morning America, Face the Nation, the History Channel, PBS, and many other television and radio programs, including National Public Radio’s Fresh Air and All Things Considered, and WNYC’s On the Media.

He has argued before the United States Supreme Court, testified before Congress (as well as before committees of parliamentarians in Canada and the U.K.), was an invited presenter at the White House Conference on Hate Crimes, and served as a member of the U.S. Delegation to the Stockholm Forum on Combating Intolerance.

Mr. Stern’s report on the militia movement, released 10 days before the Oklahoma City bombing, predicted attacks on the government, and the covering memo to the report said such attacks might occur on April 19, 1995, the anniversary of the deaths of members of the Branch Davidian sect. Mr. Stern’s report was called “prescient,” and his resulting book—A Force Upon the Plain: The American Militia Movement and the Politics of Hate—was nominated for the National Book Award. (Links to his other reports and monographs can be found here.)

Mr. Stern was the lead drafter of the “working definition” of antisemitism. He was also an integral part of the defense team in the historic London Holocaust denial case of David Irving vs. Deborah Lipstadt. Mr. Stern was also defense counsel for Dennis Banks, cofounder of the American Indian Movement (chronicled in his award-winning book Loud Hawk: The United States vs. The American Indian Movement).

His newest book, The Conflict Over the Conflict: The Israel/Palestine Campus Debate (New Jewish Press, 2020), has been called a “must read,” “thoughtful and provocative,” a “gift,” a “rare and uncompromising testament to free expression” and a “blueprint for how to navigate the ‘conflict over the conflict’ on campus.” Its first chapter is entitled “Thinking about Thinking,” and draws from hate studies to explain how our thinking changes when our identity is tethered to an issue of perceived justice or injustice.

“Hatred has always been part of the human condition,” Stern said at his appointment as director of BCSH. “It is too little understood, but is a matter of increasing global urgency. The long-term goal is to make BCSH a central address for anyone—students, scholars, NGOs, and others—who want to understand this vexing question better, including what works best to control or curtail it.”