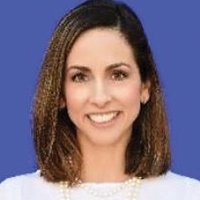 Prior to this, she worked for more than two decades for the ADL, most recently serving on the national team as Associate Director for the Center on Extremism, which combats extremism, terrorism and all forms of hate in the real world and online. She trained more than 12,000 federal, state and local law enforcement officers, judges and public officials nationwide on extremism and domestic terrorism related issues. Ms. Mendelson is a certified subject matter expert and has provided testimony in numerous criminal cases involving extremism. In partnership with law enforcement partners, she has helped thwart potential extremist attacks against Jews and other vulnerable communities. Additionally, Ms. Mendelson authored, then testified and successfully lobbied in favor of legislation addressing paper terrorism tactics used by sovereign citizens. She frequently speaks to national and international media outlets, including CNN, the BBC and CBS.