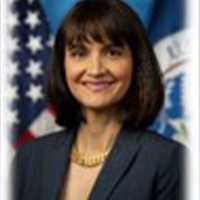 Jenny Presswalla is the Director (Acting) of the Center for Prevention Programs and Partnerships (CP3) at the US Department of Homeland Security.  As Director, she manages the Department’s efforts to prevent acts of targeted violence and terrorism. CP3 works to strengthen our country’s ability to prevent terrorism and targeted violence nationwide through funding, training, increased public awareness, and partnerships across every level of government, the private sector, and in local communities.

She was formerly CP3’s Deputy Director of Field Operations, leading the team that builds prevention capabilities locally in communities across the country.  Jenny also established the Department’s first public health informed model for targeted violence prevention out of Colorado.  Jenny was formerly the Branch Chief for prevention at the National Counterterrorism Center in Washington, DC, leading a team of subject matter experts who coordinated US Government prevention policy and strategy. Jenny previously worked at the DHS Office for Civil Rights and Civil Liberties, leading DHS engagement of diverse American communities in Los Angeles and training law enforcement on prevention nationwide.