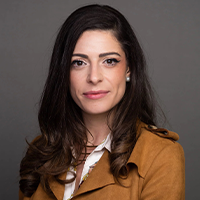 Federica D’Alessandra is the Deputy Director of the University of Oxford’s Institute for Ethics, Law, and Armed Conflict (ELAC), and the founding Executive Director of the Oxford Programme on International Peace and Security at the Blavatnik School of Government, where she focuses on international law, foreign policy, and global governance issues, and teaches courses covering the same subjects. She often advises governments and international organisations on her areas of expertise both at the strategic and operational level, having served on a number of expert panels – most recently on the harmonisation of atrocity prevention mechanisms, UN institutional reform, and the cross-sectorial standardisation of best practices to bring terrorists and the perpetrators of atrocity crimes to justice. In addition, D’Alessandra also often advises on international treaty negotiations and amendments, having supported various rounds of amendments to the Rome Statute of the International Criminal Court (on the crime of aggression and the war crime of starvation, among others), an d regularly addresses the UN Human Rights Council in Geneva. Prior to joining Oxford, Federica held various appointments at Harvard University, including at the Harvard John F. Kennedy School of Government, and at the Harvard Law School, where she focused on transitional justice, national security, and human rights. She is the holder of numerous awards and recognitions, including the William Reece Jr Award by LexisNexis and the International Bar Association, and having been recognized by Forbes magazine as one of “30 Under 30” leaders with “the likelihood of changing the field of law and policy over the next half-century” (2017), and among the “Most Influential European Thinkers” (2018). Federica is one of the co-authors (with former US Ambassador Stephen J. Rapp and others) of the influential Anchoring Accountability for Mass Atrocities report, which makes the case for the establishment of a permanent UN investigative mechanism.