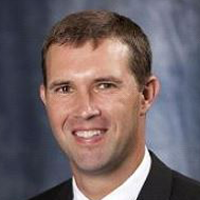 Eric Eversole, a retired U.S. Navy Reserve Judge Advocate General’s Corps Captain, leads the day-to-day operations of Hiring Our Heroes, a nationwide effort to develop and promote military talent in the United States. Working with a broad array of private and public sector partners, his team helps to create and connect transitioning service members, veterans, and their families with meaningful training programs and careers.

For more than 24 years, Eversole served in active duty and reserve components of the military. He first entered military service in 1994 as an enlisted airman in the Indiana Air National Guard and later transitioned to the Navy’s Judge Advocate General Corps. In 2019, he retired as a Navy Captain.

Recently, Eversole was appointed by the Secretary of Labor to serve on the Advisory Committee on Veterans Employment, Training, and Employer Outreach (ACVETEO). In that capacity, he helps to advise the Secretary and Congress on the employment and training needs of veterans and assesses their integration into the workforce.

Eversole holds a Juris Doctorate from Indiana University School of Law, Indianapolis, and a Bachelor of Arts from Wabash College, where he also serves on the Board of Trustees. He resides in Northern Virginia with his wife, Amanda, and their daughters, Ellie and Lizzie.