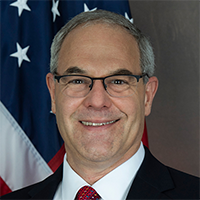 Dr. David Frey is Professor of History and Founding Director of the Stewart and Lynda Resnick Center for Holocaust & Genocide Studies (CHGS) and founding Co-chair of the Diversity and Inclusion Studies Minor at the US Military Academy at West Point. As CHGS Director, Dr. Frey oversees a comprehensive atrocity studies program and has spearheaded efforts to increase Defense Department understanding of, research into, and efforts to prevent mass atrocity. He was the 2021-22 William J. Lowenberg Memorial Fellow on America, the Holocaust, and the Jews at the Mandel Center for Advanced Holocaust Studies, US Holocaust Memorial Museum (USHMM) researching World War II era “marginal soldiers.” These include Jewish refugees who joined the US Army military intelligence and contributed to reshaping concepts of American citizenship and belonging. Author of Jews, Nazis, and the Cinema of Hungary: The Tragedy of Success, 1929-44 (IB Tauris, 2017; winner, 2019 biennial Hungarian Studies Association Book Award), co-author of Ordinary Soldiers: A Study in Law, Ethics and Leadership (USHMM, 2014), and co-author of Least-Worst Decisions: The Leadership of LTG Roméo Dallaire during the Rwandan Genocide (forthcoming), he taught at Columbia University after earning his Ph.D. in Central European History there. He is currently also working on a large multi-university project on extremist narratives and mis/disinformation. He serves on the USHMM’s Education Committee, the Advisory Board of the Holocaust Education Program at the National World War II Museum, and the executive committee of the Consortium of Higher Education Centers of Holocaust, Genocide, & Human Rights Studies.