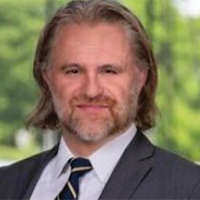 Charles Kotuby is a Professor of Practice and the Executive Director of the Center for International Legal Education at the University of Pittsburgh School of Law.  Previously a Partner in the Global Disputes practice of Jones Day in Washington DC, he spent 20 years as an international law counsel representing multinational corporations and sovereign states in complex international disputes.  He has acted in international arbitrations and litigations across a range of sectors and industries, has been counsel to clients with treaty-based claims in Central Asia, Latin America, and the Middle East, and has appeared as counsel in international matters before the U.S. Supreme Court, the Court of Justice of the European Union, ICSID, UNCITRAL and ad hoc arbitral tribunals.  According to Judge Stephen Schwebel, former president of the International Court of Justice, Professor Kotuby is one of the world’s “leading international counsel and advocates” (foreword to Kotuby & Sobota, General Principles of Law and International Due Process [Oxford 2017]).  Chambers USA has individually recognized him as a Band 1 international arbitration counsel, calling him a “wonderful lawyer” and a “standout person . . .known for his . . . extensive multijurisdictional expertise.” (ChambersUSA 2021)

Professor Kotuby has published extensively on issues of international arbitration and international law, authoring or co-authoring more than two dozen articles and book chapters over the last 20 years.  His book on General Principles of Law and International Due Process has been called “astute” (Judge James Crawford), “brilliant” (Pierre-Marie Dupuy), and a “signal contribution” to the field of international law (Judge Schwebel).  He is currently the U.S. editor for the website www.conflictoflaws.net.

An active arbitrator, Professor Kotuby is a Fellow in the Chartered Institute of Arbitrators and the Co-Chair of its Pennsylvania and Ohio Chapter.  He is admitted to panels of arbitrators with leading institutions around the world, including the Hong Kong International Arbitration Centre (HKIAC), the London Court of International Arbitration (LCIA) and the United States Council for International Business (ICC/USCIB).  He is also active in international legal reform as a member of the United States Government Delegation to UNCITRAL Working Group III on Reforms to Investor-State Dispute Settlement and the U.S. State Department Advisory Committee on Private International Law.  Prior to his time in private practice and academia, Professor Kotuby was a research fellow at the Max Planck Institute for Foreign and Private International Law in Hamburg, Germany, and a Law Clerk to the Honorable Joseph F. Weis on the United States Court of Appeals for the Third Circuit.