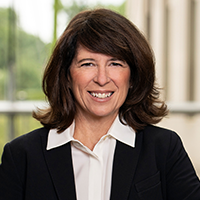 Barbara Harding is a nationally recognized trial lawyer and former federal prosecutor who has represented clients in some of the most high-profile, complex legal matters of the past 25 years. She represents clients in civil, criminal, and bankruptcy litigation involving environmental, product liability, and toxic tort issues, and she regularly counsels clients in crisis preparedness and response.

Barbara represents clients in matters involving alleged liability caused by herbicides, pesticides, asbestos, talc, explosions, water and air pollutants, food and drugs, and nanotechnology. She represented CSX in the Rosedale, Maryland train derailment and subsequent explosion and also the collapse of 26th Street in Baltimore. She acted as lead trial counsel for R.J. Reynolds in arbitration trials involving the Master Settlement Agreement. Prior to joining Jones Day, Barbara represented W.R. Grace against criminal charges filed by DOJ/EPA involving a vermiculite mine in Montana. She and the defense team secured a not guilty verdict on all charges for Grace and all individual defendants. Barbara also represented BP in litigation emanating from the 2010 Deepwater Horizon oil spill.

Barbara served as Deputy Director of the Treasury Department’s White House Security Review. At DOJ, she was responsible for the first federal prosecution of crimes involving violence toward Muslims, and she currently chairs Jones Day’s Anti-Hate pro bono initiative. Barbara was an All-American gymnast at the University of Alabama, the first woman to receive the distinguished Paul W. Bryant Alumni Athlete award, and was featured in the SEC’s 75th Anniversary “Stories of Character” ad campaign.