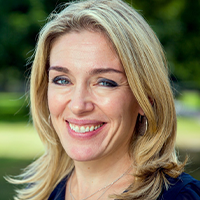 Abigail Marsh is a Professor in the Department of Psychology and the Interdisciplinary Program in Neuroscience at Georgetown University. She received her Ph.D. from Harvard University and conducted her post-doctoral research at the National Institute of Mental Health.

Her research is aimed at answering the questions: How do we understand what others think and feel? What drives us to help other people? What prevents us from harming them? Her research on these topics uses functional and structural brain imaging, as well as behavioral, cognitive, genetic, and pharmacological techniques and comprises over 90 publications in journals that include Proceedings of the National Academy of Sciences, Nature Human Behaviour, American Journal of Psychiatry, and JAMA Psychiatry. She has also written an award-winning trade book about her research called THE FEAR FACTOR (2017, Hachette) and has authored articles for The New York Times, Washington Post, NPR, and The Chronicle of Higher Education.

Her research has received awards that include the Cozzarelli Prize for scientific excellence and originality from the Proceedings of the National Academy of Sciences, The S&R Kuno Award for Applied Science for the Social Good, and the Richard J. Wyatt Fellowship award for translational research from the NIMH. She serves on the advisory boards of the National Kidney Donation Organization and 1Day Sooner, and is the co-founder of Psychopathy Is. She served as President of the Social and Affective Neuroscience Society from 2019-2021.