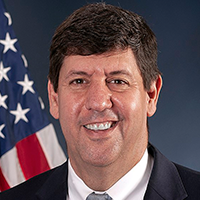 Steven M. Dettelbach was appointed by the President and sworn in as the Director of the Bureau of Alcohol, Tobacco, Firearms and Explosives (ATF) on July 13, 2022. Mr. Dettelbach is responsible for leading an agency of men and women charged with protecting the public by enforcing laws and regulations related to firearms, explosives, arson, and alcohol and tobacco trafficking.

From 2009 to 2016, Mr. Dettelbach served as the United States Attorney for the Northern District of Ohio. As U.S. Attorney, he oversaw high-profile investigations and both managed and personally handled large-scale, crisis-level litigations. He also supervised a broad docket of complex affirmative and defensive civil matters. After Clerking for the Hon. Stanley Sporkin, Mr. Dettelbach served from 1992 to 2006 as a career federal prosecutor in the Civil Rights Division and at three United States Attorneys’ Offices. He was also detailed as counsel to the United States Senate Judiciary Committee shortly after the 9/11 terrorist attacks. Most recently, Mr. Dettelbach was a partner and litigation group leader at a major national law firm.

In his 30-year career, Mr. Dettelbach has been involved in nearly every type of criminal, civil or regulatory investigation. He has also served in senior policy roles at the Department of Justice, having been appointed by two Attorneys General to the Attorney General’s Advisory Committee (AGAC). Mr. Dettelbach also was appointed to Chair the AGAC Civil Rights Subcommittee by both Attorneys General Holder and Lynch, and he was the longest serving Chair in the Obama Administration.

Mr. Dettelbach is the recipient of numerous honors and awards for his service. These include the Cleveland Metropolitan Bar Association’s Pace Setter Diversity and Inclusion Award for community outreach and hiring as United States Attorney; being named Prosecutor of the Year by the International Association of Financial Crimes Investigators; the Community Partner Collaboration Award for leadership in combatting the heroin and opioid epidemic; the Legal Aid Society of Greater Cleveland’s Louis Stokes Paragon Award; Recovery Resources Exemplar Award for leading the multidisciplinary Heroin and Opioid Task Force in 2015; and the Stephanie Tubbs Jones Award for Public Service in 2016.

Mr. Dettelbach received his J.D. from Harvard University in 1991 and his B.A. from Dartmouth College in 1988. He is married with two children.