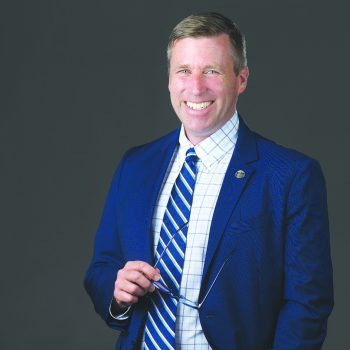 Michael E. Hill serves as the 18th President of Chautauqua Institution, a national not-for-profit that owns and animates a 750-acre campus on Chautauqua Lake in southwestern New York State and has offices in Washington, DC.  Each summer, approximately 10,000 persons are in residence on any day during a nine-week thought leadership season, and a total of more than 150,000 attend scheduled public events, which regularly includes leaders in corporate America, the arts and sciences, and at the highest level of government service, nationally and internationally.

Dr. Hill began his work at Chautauqua on Jan. 1, 2017, and immediately set about ushering in a fresh, expanded vision for the Institution as it approaches its sesquicentennial in 2024, with emphasis on expanding civil dialogue in the nation through Chautauqua unique interdisciplinary and intergenerational lens.  He has implemented a massive expansion to year-round programming through digital and in-person engagement both on and beyond Chautauqua’s physical grounds.  During his tenure, Dr. Hill has overseen the approval and implementation of a new strategic plan, 150 Forward, that will see Chautauqua through and beyond its 150th birthday in 2024.  He also led the Institution’s response to the 2020–21 coronavirus pandemic and its associated challenges, including a significant investment in mission-driven online properties via CHQ Assembly, a digital collective that in its first year alone produced hundreds of programs with participants in more than 50 countries.  He oversaw the successful completion of the $41.5 million Chautauqua Amphitheater project; the appointments of a new generation of Institution leaders in key strategic areas; and an expansion of the Institution’s engagement efforts within the Chautauqua community, with its regional neighbors, and with national partners including the American Enterprise Institute, Smithsonian Institution, Interfaith America, PBS, and Jazz at Lincoln Center, among many others.

A passionate advocate for lifelong learning, Dr. Hill holds his doctorate from Vanderbilt University’s Peabody College, where his research has focused on interfaith engagement in corporate America and as part of overall diversity efforts.  He recently completed a nine-year tenure on the Board of Trustees of his undergraduate alma mater, St. Bonaventure University, where he was an officer of the Board.  He continues to serve as a member of the University’s journalism advisory committee as part of his ongoing work to ensure freedom of speech and expression in the United States.  He is a member of the Board of Directors of the Robert H. Jackson Center, which seeks to advance public awareness and appreciation of the principles of justice and the rule of law as embodied in the achievements and legacy of Robert H. Jackson, U.S. Supreme Court Justice and Chief U.S. Prosecutor at Nuremberg.

From his first days at Chautauqua, he has promoted the belief that Chautauqua’s gates must be gateways to greater sharing and opportunities for all who call Chautauqua County home and any who wish to participate in the exploration of the best in human values in society. He has played a key leadership role in bringing the Jefferson Project to Chautauqua County, working with county leaders and others to advance a science-based solution for Chautauqua Lake while helping to set an agenda for advances in freshwater solutions in the nation.