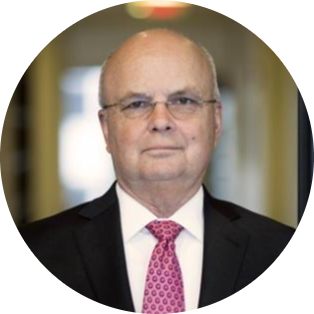 General Michael Hayden is a retired four-star general who served as director of the Central Intelligence Agency and the National Security Agency. As head of the country’s premier intelligence agencies, he was on the front line of global change, the war on terrorism and the growing cyber challenge.

In addition to leading CIA and NSA, General Hayden was the country’s first principal deputy director of national intelligence and the highest-ranking military intelligence officer in the country. Hayden also served as commander of the Air Intelligence Agency and Director of the Joint Command and Control Warfare Center and served in senior staff positions at the Pentagon, at U.S. European Command, at the National Security Council, and the U.S. Embassy in Bulgaria. He was also the deputy chief of staff for the United Nations Command and U.S. Forces in South Korea.

Hayden has been a frequent expert and commentator on major news outlets and in top publications, valued for his expertise on intelligence matters like cyber security, government surveillance, geopolitics, and more.

Hayden is currently a principal at the Chertoff Group and a distinguished visiting professor at George Mason University. He is on the board of directors of Motorola Solutions and serves on a variety of other boards and consultancies. In 2014, he was the inaugural Humanitas visiting professor in intelligence studies at Oxford University. His memoir, Playing to the Edge: American Intelligence in the Age of Terror, was a New York Times best-seller.