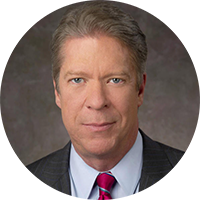 Major Garrett was named CBS News’ chief Washington correspondent in December 2018. As chief Washington correspondent, Garrett reports for all CBS News broadcasts and platforms. Garrett is also the host of “The Takeout,” a weekly multi-platform interview show on politics, policy and pop culture available on CBSN, top radio stations across the country, and all podcast platforms.

From 2012 until 2018, Garrett served as the Network’s chief White House correspondent. While covering the White House for CBS News, Garrett reported extensively on presidential actions to confront ISIS, Ebola, nuclear negotiations with Iran and U.S.-European efforts to confront Russia in the standoff over Ukraine. On domestic issues, Garrett reported on the Obama administration’s handling of the health care website rollout, numerous policy failures at the Veterans Administration and the president’s ongoing efforts in 2014 to address racial strife and criminal justice reform. He has traveled with the president to Asia, Europe and the Middle East.

In 2015-2016, Garrett spent 16 months on the road covering the Republican presidential campaign, including every GOP debate, both major party conventions and every day of the general election. During the transition, Garrett broke numerous cabinet appointments, including Jeff Sessions as attorney general. Garrett has covered every major domestic and foreign policy story of the Trump administration.

Before joining CBS News as chief White House correspondent, Garrett was a fixture during CBS News’ coverage of Campaign 2012 through a partnership with the National Journal, where he was chief White House correspondent. He co-hosted the Network’s coverage of the 2011 South Carolina Republican Primary debate alongside CBS EVENING NEWS anchor and managing editor Scott Pelley and offered analysis for every 2012 general election presidential debate.

Prior to National Journal, Garrett was the senior White House correspondent for Fox News. During his eight years at Fox, Garrett also covered two presidential elections, Congress, the war in Iraq and other major stories. Before joining Fox News, Garrett was a White House correspondent for CNN during the administrations of George W. Bush and Bill Clinton. Previously, he was a senior editor and congressional correspondent for U.S. News and World Report, where he reported on Congress and the impeachment of President Clinton. He was a congressional reporter for The Washington Times (1990-1995) and the newspaper’s deputy national editor (1995-1997). Earlier in his career, Garrett was a reporter for The Houston Post, Las Vegas Review-Journal and the Amarillo Globe-News.

Garrett graduated in 1984 from the University of Missouri with degrees in journalism and political science. A native of San Diego, Calif., he lives in Washington, D.C.